Join GRAMMY Museum® Mississippi as we feature slide guitarist and 2022 GRAMMY Award® nominee Kenny Brown for an intimate conversation and performance as part of the Words & Music: A Songwriter Series. Tickets are $15 for GRAMMY Museum Mississippi Members and $20 for non-members. 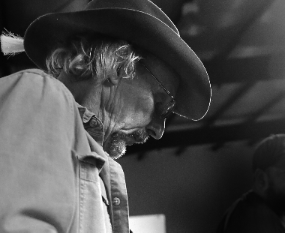 KENNY BROWN is an American blues slide guitarist skilled in the North Mississippi Hill Country blues style. Brown began hearing Otha Turner, Napolean Strickland and others who played at picnics across the road from his home at 7 years old. Brown apprenticed with Mississippi Joe Callicott, who moved in next door to his home in Nesbit, Miss., from age 12 to 15, when Callicott died. Around 1971 Brown began playing with two other musicians. Johnny Woods would make an occasional playing partner until his death in 1990. More steady was Brown's learning with R. L. Burnside, who claimed Brown as his “adopted son." In the early '70s they started to perform in their region and would keep up as a duo for 30 years, sometimes being joined by Calvin Jackson on drums. Cedric Burnside joined their tours beginning in 1994, as Burnside's reputation surged in the '90s and early 2000s. Brown first appeared abroad in Sweden in 1989.

Brown's guitar work was featured in the 2006 film Black Snake Moan, where he provided backing for star Samuel L. Jackson's vocals. He can be seen in the film's climax as a guitarist in a blues band, playing alongside Cedric Burnside. Brown continues to perform locally, regionally, nationally, and internationally and currently lives in the North Mississippi Hill Country.