The first-ever Good News Gospel Festival will take place on the lawn at GRAMMY Museum® Mississippi on Saturday, Sept. 3, 2022, beginning at 12 p.m. This FREE community event will celebrate the rich heritage of gospel music in the Mississippi Delta, featuring performances by the GRAMMY®-winning Mississippi Mass Choir, Dr. Andrew Cheairs and the Songbirds, Chris Dixon & Joyfull Noise, Harmony of Boyle, The Eternal Light Singers, G Hope Mass Choir, Markise Jones & the Guys, and the Lamplighters of Mound Bayou. Stan Jones, multi-award-winning musician and Senior Director of A&R at One Entertainment, will host the show.

* Please note that the festival schedule is subject to change without advance notice. Follow the Museum's social media for the latest updates!

OUTDOOR EVENT IS FREE ADMISSION. MUSEUM ADMISSION IS $5 PER PERSON.

NON-PERMITTED ITEMS: Alcohol or Alcoholic Beverages and Pets/Animals (With exception of Service Animals) 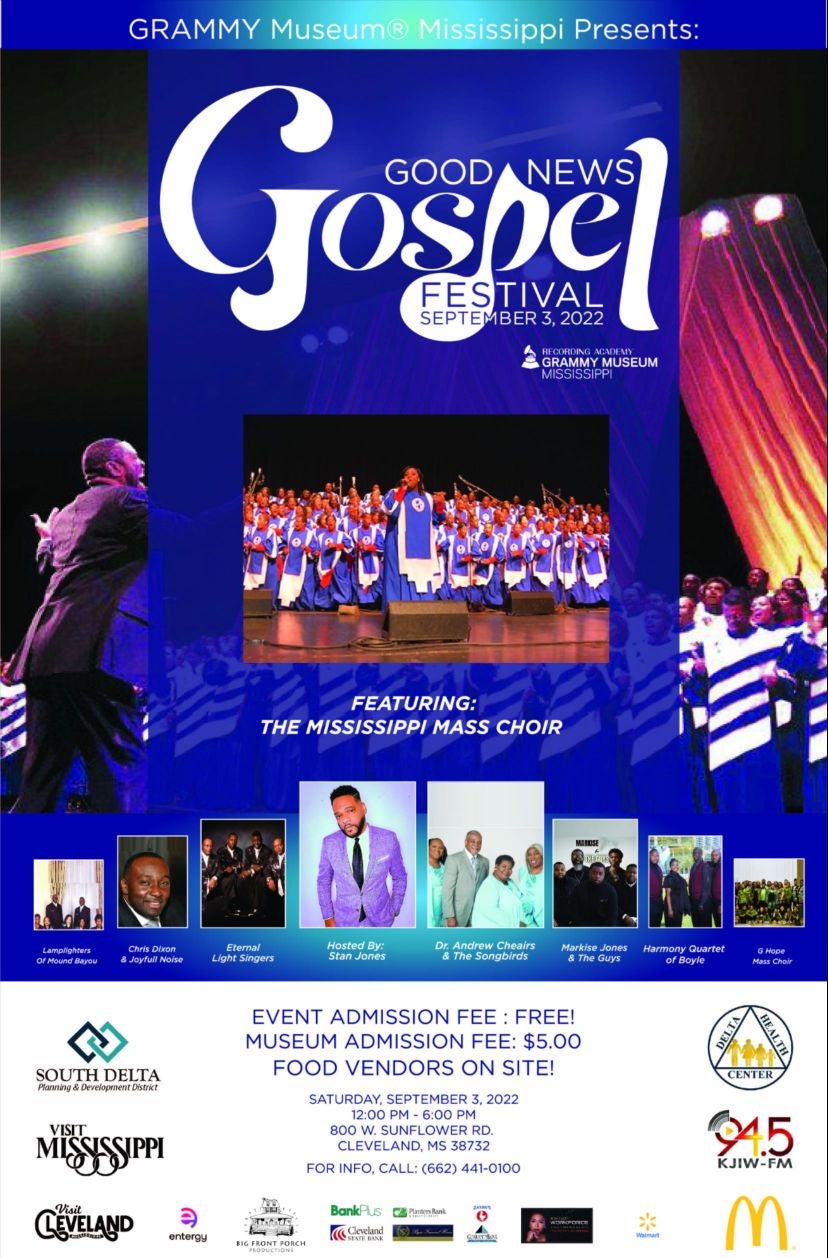 The Mississippi Mass Choir was formed over 30 years ago by Frank Williams, a member of The Jackson Southernaires. Williams shared his vision with Malaco executive Jerry Mannery, who gave him the green light to assemble the choir with David R. Curry selected as music director. After open auditions and months of rehearsals, the Mississippi Mass Choir recorded its debut album in October of 1988 at the Jackson Municipal Auditorium. The self-titled debut hit #1 on the Billboard Top Gospel Albums chart and set a gospel industry record for most consecutive weeks on the albums chart (45). It received four Stellar Awards as well as Dove and Soul Train Award nominations. The group was named Contemporary Choir of the Year and Best New Traditional Artist by the Gospel Music Workshop of America. The 1990s and 2000s found the choir touring the country fueled by more than 125 voices. One of the most popular albums of this period was Emmanuel: God with Us, featuring He Can Fix What’s Broke and They Got the Word. In 2008, the Mississippi Mass Choir recognized its 20th anniversary with a special live recording called The First Twenty Years. More recent offerings by the choir include Then Sings My Soul, and Declaration of Dependence, which featured a guest lead from GRAMMY Award winner Le’Andria Johnson on God’s on Your Side. The Choir has performed in more than 40 states across the United States, and has traveled to the countries of Japan, Italy, Spain, and Greece, among others. They were the first gospel group to perform at the Acropolis, and the first African- American choir to perform with a European symphonic orchestra, when they performed on Christmas night 2010 with the 92-piece Tenerife Symphonic Orchestra in the Canary Islands. Now in its 34th year, the Mississippi Mass Choir continues to make standard hymns and new compositions their own while remaining true to the traditional gospel choir sound that brought them safe thus far.